Our products are now available on Amazon! Click Here

If any of my neighbors had seen me ironing my daughter’s mattress while wearing a blue shower cap, they undoubtedly would have thought I was nuts.
But after we found nits — lice eggs — in my 9-year-old daughter’s hair, I panicked.
I washed her hair in olive oil and vinegar. I put her dirty clothes and linens in large plastic bags and washed them in hot water. I crammed pillows and stuffed animals into the dryer and set it on high heat. And yes, I even ironed her mattress because a friend told me heat kills lice.
I’m embarrassed to say I wore that shower cap too often during the first few days after lice became part of our lives. I didn’t just wear it for ironing; I also used it when I tried to comb the nits out of Emma’s hair after using an over-the-counter lice treatment creme rinse.
None of this was surprising to Dr. Shirley Gordon, a nurse and professor at Christine E. Lynn College of Nursing at Florida Atlantic University. Gordon, director of the Head Lice Treatment and Prevention Project, has studied lice since 1996 and is fascinated by the social ramifications. 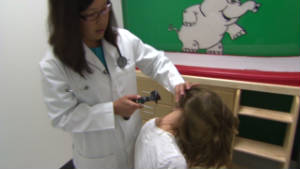 Lice: what to look for, how to treat it 01:23
“On a scale of 1 to 10, you’re a 1½,” said Gordon, whose research focuses on persistent cases. Some parents, she said, have used kerosene and gasoline to rid their children of lice.
Lice is an equal-opportunity parasite, yet so many myths continue to surround head lice, including the idea that people who get lice are dirty or live in dirty homes, she said.
“I think one of the causes of the transferability of head lice is silence,” Gordon said. “People don’t want to tell other people their family has head lice because of the social stigma and the long-term ramifications. You become known as a lice family. When you clear up the infestation, that stigma doesn’t go away.”
It’s hard to say how many people get lice in the United States. According to the Centers for Disease Control and Prevention, between 6 million and 12 million infestations occur each year among children ages 3 to 11.
But that number is likely low. Lice is not a reportable condition, which means there isn’t good data on how many cases there are, Gordon said. Cases spike, however, during the first few months of school and after winter and spring breaks.
“We see increased cases after children have spent extended periods of time in the community,” she said.
Summer camp is also one form of community, she said. Many camps screen for head lice when children arrive; others send letters to parents telling them to check their children for lice before camp starts.
Lice is controversial at every turn, Gordon said, from how children with lice should be treated in school — the American Academy of Pediatrics says no healthy child should miss school because of head lice and that schools should abandon no-nit policies — to treatment with over-the-counter products, which are pesticides.
I was confused and misinformed when my daughter got lice. I was also loath to tell people, but knew I had to. I e-mailed her teacher and told her I believed Emma got lice from a wig she had worn a day earlier for play rehearsal (that’s possible, but unlikely, Gordon said). “The most frequent reaction is anger and disgust, and there is a sense of wanting to know the source of the head lice infestation,” Gordon said.
A few other things to know about lice, she said:
— Lice don’t jump or fly; they crawl from one person to another.
— Head lice are treatable (it might take some work) and rarely cause serious health problems.
— Head lice are usually spread from head-to-head contact, not from sharing brushes, hats or bedding (although that is also possible).
— Head lice may be on your head, your child’s head or your spouse’s head, but it won’t affect your pets and can’t infect furniture, bedding or pillows.
For days after using the over-the-counter lice treatment, my husband and I diligently combed through my daughter’s hair with a comb designed to remove nits.
This wasn’t easy. The nits attach themselves to the hair with a glue-like substance. I thought I was doing a good job and naively thought we had the infestation under control.
But a week after the treatment, I found a louse. I panicked again, this time because my daughter had spent all day and night with a group of close friends. I immediately sent texts to my friends, apologizing profusely. Then I sought out a professional service, The Hair Angels in Pasadena, California — one of many such services nationwide.
Emma watched a movie on a DVD player while our “angel,” Poli Rodriguez, separated her hair into sections, methodically combing it and removing nits, sometimes with a pair of tweezers.
Rodriguez, who has been removing lice for five years, admits you need a lot of patience.
“What we have learned in this industry is that there are no shortcuts to removing lice,” said Michelle Aloisio, co-owner of The Hair Angels. “The only way to remove it is the long, hard, manual way.”
Gordon recommends using the Shepherd Method to remove lice and nits. Rodriguez did: after combing Emma’s hair, she divided it into four equal sections. She examined each quadrant in paper-thin sections, one strand of hair at a time. Then she did another check for missed bugs or nits before inspecting my hair. (I said a silent prayer of thanks when she told me I didn’t have lice.)
“Removing all the nits is the toughest part of lice removal,” Aloisio said. “If you don’t get every single nit, they are going to hatch and the whole cycle is going to start all over again.”
Products kill adult lice, but not eggs or babies. Most of Aloisio’s clients go to her after about a month of trying to get rid of lice themselves.
As far as prevention, Aloisio suggests girls wear their hair pulled back in braids or in a bun. “Swinging hair offers a bridge to infestation,” she said.
Rodriguez used a stainless steel comb and showed me the correct technique for pulling it through my daughter’s hair. I’ve been doing that every night since.
She also used a nontoxic lice infestation removal mousse and a mint spray Aloisio says deters lice. While preliminary evidence shows lice are repelled by mint in laboratory settings, Gordon said there are no strong field studies supporting mint as an effective repellent.
Two and a half hours and $210 later, we left the salon with the comb, the mousse, the spray and the hope that we had won the battle.
If your child has lice, Gordon advises screening friends, relatives, neighbors and people your child spends time with. She also recommends checking for lice once a week.
Her final advice to parents? “Take a deep breath. It’s just lice.”
head lice treatment miamiin home lice treatmentlice removal miamimiami lice removalSuper Lice Miami